In this interview, I speak to Dr. Joanna Kenty about making connections between rhetorical studies and classics. Dr. Kenty is a Postdoctoral Researcher at Radboud University in Nijmegen, Netherlands. She earned her Ph.D. from the University of Pennsylvania, where she studied Roman political oratory.

The officers and Steering Committee of the American Society for the History of Rhetoric acknowledge and support the efforts of NCA (and many of its divisions) and RSA to examine assumptions about and change protocols governing the ways scholars and scholarship gain official recognition.

We also acknowledge and support those scholars in our discipline who have long been striving for more diverse and inclusive institutions within and without the academy. We know there is lots of work to do. For our part, we pledge to better orient ASHR’s practices, programming, spaces, and pages around matters and realities of equity, diversity, and inclusion.

Our founding and continuing mission is to promote the study of rhetoric in all periods, languages, and cultural contexts, and we hope to help make the history of rhetoric a more diverse and inclusive sub-field within Communication and Rhetorical Studies.

In this ASHR interview, I speak to Dr. Cory Geraths about his interest in reception history and queer and feminist historiographical methods. Dr. Geraths is Visiting Assistant Professor of Rhetoric at Wabash College. His research areas include classical rhetoric, rhetorics of gender and sexuality, Christian rhetoric, rhetorical historiography, and rhetorical pedagogies.

JL: Thanks for agreeing to be interviewed, Cory. While we have both been a part of ASHR for a few years, I’ve never had the chance to learn about how you became interested in your current research projects: I appreciate having that chance now! Can you tell me about how you became interested in the history of rhetoric? What initially drew you to the field? 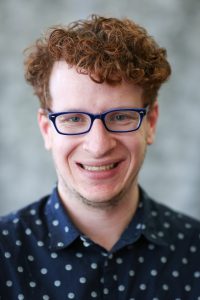 CG: While completing my graduate degrees in Rhetoric at Penn State, I had the pleasure of taking courses from some of the foremost scholars in the history of rhetoric. Courses in feminist rhetorical history and historiography with Cheryl Glenn, on classical rhetoric with Michele Kennerly, and public memory with Stephen Browne (to name just a few examples) introduced me to the diversity of texts, methods, and questions that undergird scholarship on rhetoric’s histories. While these classes began to fashion my interest in the history of rhetoric, it was not until a series of research collaborations with Michele Kennerly—my doctoral adviser—that I became truly enraptured by the feminist power of historiographic recovery and the splendor of reception histories. The second of these projects was an expansion and extension of feminist rhetorical scholars’ recovery of Aspasia, a 5th-century BCE rhetor and pedagogue. Our essay, “Painted Lady: Aspasia in Nineteenth-Century European Art” (Rhetoric Review 35.3, 2016), explored Aspasia’s reception and diverse rhetorical depictions in British and French painting and lithography. This experience studying Aspasia—and coming to see her rhetoric in a new light via the multimodal media of art—was particularly instrumental in solidifying my commitment to the history of rhetoric.